Some thoughts on Venture Capital

I used to be fascinated by Venture Capital. I used to think that being a venture capitalist is in fact being a vital supporter of entrepreneurs in making their ideas happen. They are the spark, the enablers, the believers. I loved the classes of Venture Capital and Entrepreneurial Finance I took during my MBA, four years ago (already!!) I greatly enjoyed being part of the Venture Capital Competition, where I won with my team of that time a regional award, following a thorough assessment by a jury of venture capitalists (they evaluate the terms you reach with the entrepreneurs, your investment thesis etc. We did not make it to the national one though). I learned a lot of skills : how to analyze business plans, how to challenge assumptions, how to negotiate with entrepreneurs, skills that I find useful to this day. I follow various blogs and books written by VCs, such as avc.com or the excellent ” the Hard Thing about Hard Things ” and the wise “the Monk and the Riddle”. They are full of insights on market trends, business practices, and investment approaches. I encourage anyone interested in entrepreneurship and innovation to read what VCs have to say. They are usually very smart and very knowledgeable :)

However, after few years working as (impact) investment professional, my views are more sober.
I learned first that most of the VC funds are mediocre. They have cool names, logos, strategies and often very competent teams but they cannot raise enough money or end up performing very poorly. I am pretty sure if I come back to the funds that were generating some hype back in 2011 or 2012, I would find out they don’t exist anymore. In fact, most of the return are captured by a very small number of funds. 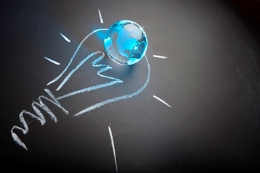 I also discovered that VC is a “rigged game” as Chris Sacca said (a very cool Georgetown alumnus by the way, who got into entrepreneurship and investing after having been fired as a lawyer). You get paid by investor, to deploy their money. If it goes well, then you get a substantial chunk of the return (the famous 20%). If not, well you still get the management fees.

VCs take way less risk than I previously ( and naively) thought. They might be good in finding talents but they often come in at a very late stage, when the business is already running with thousands of users/clients. The concept has already been proven, and they invest some money to take it to the next level. Those who “make the idea happen” invest at a very early stage- most probably friends or associates, not VCs. Don’t get me wrong, VCs do add value in many cases. They have a large database of contacts and lessons learned, but most of their focus is on how to exit and get a good return for their backers (nothing wrong with that but it does contradict what I previously thought). There are hundreds of stories and accounts on how VCs turned around companies and saved startups, but most of the cases, they want to invest in companies doing greatly already ( and make them a little better). And usually, you get to invest first in those great companies thanks to a better network and better access ( of course a direct consequence of your reputation and track record). It is just less sexy and influential than what I thought a few years ago.

Now does that mean that we should dismiss VCs or deny their role in developing unicorns and high impact companies? Absolutely not. A large number of VC funds are a sign of a healthy start-up ecosystem. A reasonable number of VCs ensure availability of capital and knowledge for start-ups at a reasonable cost. Competition between VCs ensure that excellent entrepreneurs can have access to good valuations and effective support. Specialized funds can support innovators in their very niche ideas. Who am I to doubt their effectiveness when you see their god-like status in the Valley?

But many entrepreneurs out there do not have the market and the potential to become unicorns. They offer a service that is relevant for a small market. They do not want to scale very quickly. They want to keep low profile. They want to focus on one niche or one area. They do contribute to the economy, they do create jobs, but they are not aiming at getting 20% of the worldwide market within five years (a typical VC ambition) These entrepreneurs need a different type of support, one that VCs are not fit and willing to offer. So I have big doubts when I see some policy makers obsessed with creating and supporting VC funds as a paramount condition to stimulate entrepreneurship (in the Arab World for instance). Maybe they are not the answer? Maybe they should pop up when we reach a critical mass of excellent entrepreneurs? Maybe there are other long-term funding (and debt) options to implement, less sexy but more adapted? Why don’t we focus instead on developing venture debt? I am getting into complicated and technical stuff so I would rather stop here. Your comments are welcome!